“What do you think? A man had two sons; he went to the first and said, ‘Son, go and work in the vineyard today.’ He answered, ‘I will not’; but later he changed his mind and went. The father went to the second and said the same; and he answered, ‘I go, sir’; but he did not go. Which of the two did the will of his father?” They said, “The first.” Jesus said to them, “Truly I tell you, the tax collectors and the prostitutes are going into the kingdom of God ahead of you. (Matthew 21:28-31)

As the old saying goes, there are three kinds of people in this world: those who watch things happen, those who make things happen and those who say, “What just happened?” This scripture from Matthew offers lessons on belief backed by action, not by preaching about things or complaining, but by doing.

Jesus tells this parable of the two sons to illustrate how actions are significantly more important than intentions. He highlights the difference between those who pay lip service to God – and those who, having set out on the wrong track, change their minds and turn back to do as He asks.

Jesus describes a situation that we are all familiar with. We have all met people who say they will do something – and then find they didn’t do what they said they would; those who make promises, but don’t keep them. And we have probably also met people those who start out being against an idea or refuse a request but who then think better of it, and not only fulfill the request, but go beyond what was asked and do even more.

Jesus tells a story which is rather common: one son is asked to go to the vineyard to complete a task. He says that he will do as his father asks; we assume he will do what he says. The second son refuses to do what his father asks. One son seems to be in the right and the other in the wrong.

However, appearances are often deceiving. The son who appears to be ‘right’, agrees to do his father’s work, but fails to go to the vineyard. He never shows up – all talk and no do. Yet the second son, who had first refused to obey and help his father, then changed his mind and went on to do his father’s work; this is, in the end, the son that did the ‘right’ thing. Because doing what is right means more than words and promises.

Like most of Jesus’ parables, this story isn’t really about the two boys. It’s about you and me. It’s about two kinds of people in this world: those that profess faith in God, but do not do His will and work, and those who do the will of God while, perhaps, saying ‘no’ to a lot of showy, church beliefs and preaching.

I don’t know about you, but, there have been times in my life when I’ve uttered nice, pious words about God but showed unbelief through my actions. And there was a time in my life when I wanted nothing to do with God, but tried to live my life with as much integrity and goodness as possible.

Are we the faithful or the unfaithful son? Both lied to the father. But one changed his mind and went to work while the other never followed through. We know the answer to Jesus’ question — the son who finally did what his father asked is the hero in this parable.

The meaning is so obvious.

Some religious people make all kinds of grandiose promises to God but their performance doesn’t live up to their promises. The Christians promise God, “O yes, God, I will be your faithful disciple. I will live a Christian life.” But they don’t do a darn thing. They are ‘do as I say, not as I do’ Christians. So God will find some less ‘churchy people’ who actually go and do His work in this world.

All of us would rather direct this parable to others. Lord knows we can point fingers. But this parable is addressed to you and me.

It is about integrity, about putting your money where your mouth is.

We must say what we will do and do what we say we will do.

Jesus teaches that having the intentions to obey God isn’t enough. It is only those who actually obey God, whether they originally say they will or not, who are doing the will of God.

SOMETIMES OUR ACTIONS DO NOT MATCH OUR WORDS.

Intentions alone aren’t worth anything, because obedience or disobedience are actually found in what we do, more than in what we do.

We must say what we will do and do what we say we will do.

Let me leave you with an example of someone who truly lived what he believed: 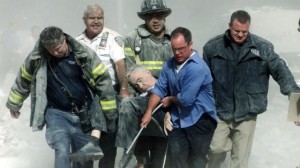 We have passed the thirteenth-year anniversary of the attack on the World Trade Center in September. Among the thousands of victims of that attack was Father Mychal F. Judge, the fire department chaplain who, while ministering to the fire fighters working at Ground Zero, was killed by falling debris from the Towers. In Father Mychal’s pocket was this prayer that he always carried with him:

Father Mychal was a man of commitment. He understood that the vows he took before God were not a trivial matter. He is one who said, “I’ll go,” and he went.

deni doulos – Servant at the Table of the Lord

deni doulos – Servant at the Table of the Lord

Finding Christ on the paths of Life

Life Among Sophia
Because I can...

Whenever you think you can't, try thinking I can.

Celebrating life in the Catholic Church

joyfulbrix.wordpress.com/
Note To My White Self

The reflections of a white man confronting his personal privilege and racism.

Faith on the Fringe

Christian faith on the fringe of the mainstream culture

Stuff That Needs To Be Said

Gays in the Life

Godinterest Christian Magazine is dedicated to proclaiming Christ and set apart, to save and empower lives.